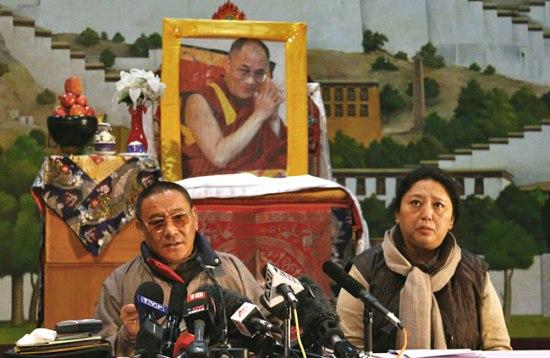 Dharamsala, November 22: While reaffirming their absolute “faith and allegiance” in the Dalai Lama’s leadership and agreeing to pursue for Tibet’s autonomy, Tibetan exiles did not rule out a possible shift in policy to independence if current middle-way policy fails to yield any result in the near future.
Over 500 Tibetan leaders and representatives from around the world today ended a six-day “Special Meeting”, which was started on Monday, in Dharamsala, the base for the Tibet’s government in exile in northern India. 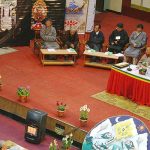 The speaker of the Tibetan Parliament-in-exile Mr Karma Chophel, who chaired the meeting, described the final report of the meeting as a summary of the opinions and suggestions of the people to be submitted to the exiled Tibetan leader the Dalai Lama for his further considerations.
In the report, the delegates have urged the exiled Tibetan leader Dalai Lama not to consider “complete retirement” or even “semi-retirement” in leading the Tibetan people’s cause.
Among other things, the report also suggests that the talks by Dalai Lama’s envoys with China should be stopped until Chinese leadership is serious about resolving the Tibetan issue. The report further says there was a strong opinion from the meeting that consideration must be given in seeking “independence” if such a move does not bring any result within a short time.
The report of the meeting declared that, whether seeking “independence” or “autonomy”, the Tibetan people will maintain total commitment to non-violence in their struggle for freedom.
“China has rejected our proposal for a genuine autonomy in all its form. But there is still time for China to respond positively to our sincere efforts,” Chophel told Phayul. “If China is not at all willing to do that, it will only force us to review our current policy again. Then as expressed strongly by Tibetan delegates during the meeting, there is no reason not to consider shifting our policy to independence,” the speaker added.
Jamyang Norbu, a prominent Tibetan writer and a staunch advocate of Tibetan independence, described the meeting itself as an “encouraging” one that gives public an opportunity to express their opinion and accordingly help review the Tibetan government’s policies. He said the meeting had vitalized the need to review and revamp the current middle way policy.
Jamyang, 59, said that the meeting was also a “first step in the right direction” in reviewing Rangzen (complete independence) policy and possibly restoring it if the middle-way approach continues to fail within a time limit.
Former Kalon and Representative of His Holiness the Dalai Lama to the Americas Mr. Lobsang Nyandak said the outcome of the meeting had not outlined any fixed time limit for a possible review on the policy shift.
“Everyone agrees that only through dialogues we can settle the issue. The delegates of the meeting are saying that Chinese government should now create the prospect and the atmosphere for the dialogue to take place,” Lobsang said.
“To have a review of the current policy in future, we must observe Chinese side’s reaction and discuss seriously about it,” he said.
To make China come forward, Lobsang said “it depends on what strategies we adopt and the kind of international pressure that we can build on China.” 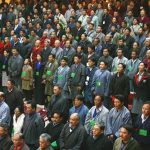 Tibetan delegates sang Tibetan National anthem before concluding the history ‘special meeting’ in Dharamsala. Over 500 Tibetan leaders and representatives from around the world took part in the six -day meeting, making it the largest political meeting of the Tibetan people held ever since coming into exile in 1959. (Photo: Tenzin Dasel/ Phayul)

Speaker Chophel said the meeting also called on China to stop criticizing and making defamatory attacks on the revered Tibetan leader. He said such remarks not only hurt the sentiments of the Tibetan people, but also hurt the sentiments of Buddhists, including Chinese, around the world and also Tibet supporters and individuals who admire the Dalai Lama’s moral principles.
“The meeting has concluded that China must accept that this year’s unrest in Tibet is a result of its misrule and wrong policies adopted against the Tibetan people for the last many decades. China has said it has evidence to prove that Dalai Lama’s exile groups have instigated the riots in Tibet, but they have already failed to show any evidence to prove their accusations,” he added.
Chophel said Tibetan people “unanimously reaffirming their trust and allegiance to His Holiness the Dalai Lama” during the meeting was a fitting reply to Chinese leadership’s remarks that the Dalai Lama has no right to represent Tibetan people. “Tibetan people reaffirming that they will follow the Dalai Lama in whatever path he deems most appropriate is a clear message; and China must acknowledge this reality,” he added.
Chophel also said the Tibetan envoys, during the latest round of talks with Chinese representatives earlier this month, had also challenged the Chinese government to allow a free and independent poll on what Tibetans inside Tibet have had to say about the Dalai Lama’s role.
Jetsun Pema, former Kalon (Tibetan minister) and the younger sister of the Dalai Lama, said the meeting was an important platform to “prepare for the future” of the Tibetan movement.
“His Holiness the Dalai Lama has always wanted to have a genuine democracy for Tibetan people and he has always promoted it,” Pema said.
Ahead of the ‘special meeting’, some 17,000 Tibetans inside Tibet had also been consulted about their opinions on the future course of action Tibet. Of them more than 8000 Tibetans said they will follow the Dalai Lama’s direction and almost 3000 backed the Dalai Lama’s middle-way approach.
The Dalai Lama is expected to address the meeting delegates on Sunday.