US President to Discuss Tibet with Hu Jintao

Tibet.net[Saturday, November 22, 2008 23:56]
Dharamshala: The United States President George W Bush will discuss human rights issues in Tibet and the ongoing discussions between the envoys of His Holiness the Dalai Lama and the Chinese leadership during his meeting with Chinese president Hu Jintao in Peru.
President Bush is heading to Lima on Friday to attend Asia-Pacific Economic Cooperation (APEC) summit scheduled on 22 and 23 November.
“The president will discuss issues of human rights and religious freedom, including the ongoing dialogue between Beijing and the Dalai Lama” on the spiritual leader’s homeland of Tibet, said White House spokesman Gordon Johndroe.
President Bush, political leaders and the people of America have been steadfast in raising their voice in the call for religious liberty and basic human rights for the people of Tibet. 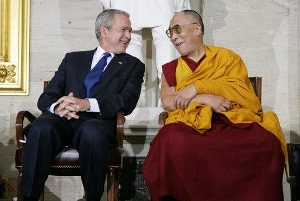 “Americans cannot look to the plight of the religiously oppressed and close our eyes or turn away. And that is why I will continue to urge the leaders of China to welcome the Dalai Lama to China. They will find this good man to be a man of peace and reconciliation,” Bush said while honouring His Holiness the Dalai Lama with the US Congressional Gold medal on 17 October last year.
“Throughout our history, we have stood proudly with those who offer a message of hope and freedom to the world’s downtrodden and oppressed. This is why all of us are drawn to a noble and spiritual leader who lives a world away. Today we honor him as a universal symbol of peace and tolerance, a shepherd for the faithful, and the keeper of the flame for his people,” he said.
In his talks with Hu, Bush also expects to discuss Iran’s suspect nuclear program, turmoil in Zimbabwe and Sudan, pressure on Burma’s military rulers to enact democratic reforms, and Beijing’s uneven rights record, said Johndroe.
Bush’s top goal was for some of the 21 APEC members to sign on to the Group of 20’s statement of principles for tackling the worldwide economic crisis, as approved in November 14-15 talks in Washington, a top aide said.
APEC comprises of the US, Australia, Brunei, Canada, Chile, China, Hong Kong, Indonesia, Japan, Malaysia, Mexico, New Zealand, Papua New Guinea, Peru, the Philippines, Russia, Singapore, South Korea, Taiwan, Thailand and Vietnam.