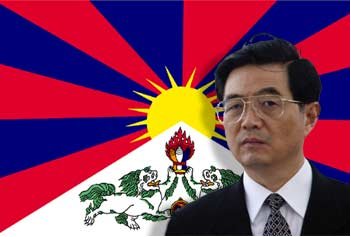 President Hu Jintao and his “Tibet Faction” have turned out to be the biggest losers in the wake of the most horrendous disturbances in Tibet and adjacent provinces since the 1959 Tibet Insurrection.
By Sunday, March 16, more than 10,000 lamas and other Tibetans had staged rallies and demonstrations and clashed with Chinese police, soldiers and People’s Armed Police (PAP) officers in the Tibet Autonomous Region (TAR) and the nearby provinces of Qinghai, Sichuan and Gansu. The Xinhua News Agency and Hong Kong newspapers have quoted authorities, including the Mayor of Lhasa, Duoci Cizhu and Gansu Governor Xu Shousheng, as saying that things are back to normal in these areas. After mass arrests of alleged ringleaders in Lhasa and other cities, virtual martial law has been imposed on the Tibet capital.
While the first wave of the “Free Tibet in the Olympics Year” campaign has apparently subsided, Hu, also the Chinese Communist Party (CCP) General Secretary and commander-in-chief, may have suffered the most devastating blow to his career.
First, as Party Secretary in Tibet from 1988 to 1992, Hu is the party’s leading authority on the region. As chairman of the Central Military Commission, Hu signed orders in mid-2007 to move more soldiers into both Tibet and Xinjiang so as to make sure that “splittists” in both autonomous regions would not make trouble for Beijing in the run-up to the Summer Olympics. He also called up members of the 650,000-strong paramilitary People’s Armed Police.
These precautionary measures, however, failed to prevent unrest. Moreover, conditions in Xinjiang have remained restive in the wake of an alleged terrorist incident on board an Urumqi-Beijing flight on March 8. As both party and military chief, Hu cannot shirk his responsibility for failing to, in CCP parlance, “nip the forces of instability at the bud.”
Much more significant is the fact that since becoming a member of the CCP Politburo
Standing Committee ” and heir apparent to ex-president Jiang Zemin ” in 1992, Hu has elevated dozens of his former underlings in Tibet and neighboring provinces to senior positions.
The current party secretaries of Tibet and Xinjiang, respectively Zhang Qingli and Wang Lequan, are longtime Hu prot-g-s. Several fifth- and sixth-generation rising stars whom Hu is grooming for leadership positions also earned their first spurs in Tibet. A notable example is Hu Chunhua, 44, the party secretary of the Communist Youth League, which President Hu headed in the mid-1980s. The younger Hu spent more than 10 years in Tibet and has already been mentioned as a potential successor to newly installed State Vice-President Xi Jinping, who is due to take over the top party post when President Hu retires in 2012.
A party source in Beijing who is close to Hu Jintao’s personal think tank said the domino effect set off by the unrest in Lhasa on March 10 could end up hurting the entire Hu Jintao Faction.
“A key reason why Hu was picked by Deng Xiaoping in 1992 as a future leader was the ruthless and efficient way in that he put down the riots in Lhasa in March 1989,” the source said. 19 years later, however, commander-in-chief Hu and his prot-g’s have failed to contain the disturbances in spite of the larger troop presence in the autonomous region.
Diplomatic analysts in Beijing say Hu and his Politburo colleagues have been hamstrung by Olympics-related factors in this effort to suppress the splittist conspirators. Talking to reporters Monday morning, Tibetan region Governor Qianba Puncog said that police and PAP officers had used “non-lethal weapons” against the rioters. “The police have displayed great restraint, and they are doing everything in accordance with the law.” This was despite reports by overseas offices of the Tibet exiled government that PAP officers had shot dead several Tibetan protestors.
It is nonetheless true that it is in the interest of Hu and company to steer clear of large-scale bloodshed so as to avoid a possible boycott of the Olympics by some athletes. In any event, the Chinese supremo’s dream of having a spotless Chinese Olympics go down as part of his legacy has already been shattered. The same can be said for the promotion prospects of members of the Chinese strongman’s “Tibet Faction.”