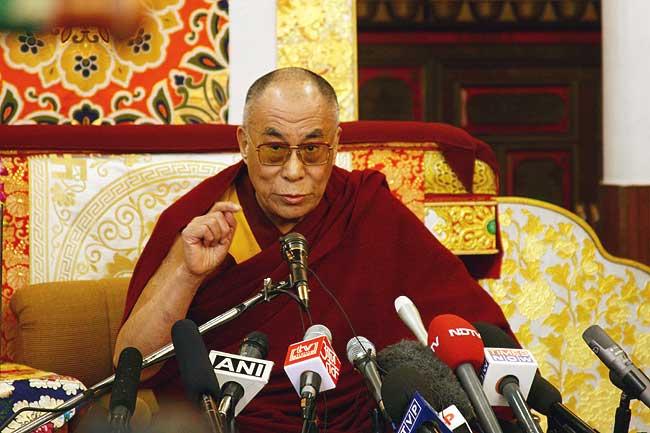 His Holiness the Dalai Lama talking to the media at a press conference after meeting with the participants of the 'special meeting', Nov. 23, 2008, (phayul photo/Tenzin Dasel)

Phayul[Sunday, November 23, 2008 18:04]
Dharamshala Nov. 23 – Reiterating his ‘unshaken faith’ in the people of China, His Holiness the Dalai Lama today said dialogue with Chinese people is important for the Tibetans. “There are two levels of dialogue, one with the Chinese government and the other with the people of China”.
The 73 year old Nobel laureate was speaking to the media after meeting the participants of the ‘special meeting’ that he called using a power given to him under article 59 of the Tibetancharter.  His Holiness said that the Tibetans inside Tibet place high hopes and faith on those in exile and that all efforts must be made to stand up to their expectations. “The Tibetans inside Tibet are our real boss.  He said that he had not much to comment on the Special Meeting but that he heard it was a meaningful one. The Tibetan leader hoped that more such meetings could be held in the future.
He clarified the view held by many that he proposed the idea of seeking genuine autonomy for Tibet after Deng Xiaoping’s remarks to Gyalo Thondup that everything can be discussed except independence saying that before the meeting between Gyalo Thondup and Deng Xiaoping, he and his ministers had already discussed the possibility of genuine autonomy for Tibet though the term ‘Middle Way’ was not used then.
He said that the international Tibet support groups who will be meeting next month in the Indian capital should be listened to, and their views also are important for the Tibetans.
He also said he had kept himself out of the special meeting so that free and frank discussion could take place. Taking a dig at the present Chinese leadership, His Holiness said that if Mao was alive today the current Beijing leadership would receive scolding for not maintaining Mao’s real socialist principles. He said China no longer is a purely socialist state as envisioned by its founding fathers.
Speaking separately to the participants of the special meeting he said that there is dire need for the Tibetan community to produce Tibetan professionals in various fields of studies. He also said that the projects initiated by Tibetan government in various settlements should also benefit the local Indian communities.
On the issue of the reincarnation of the next Dalai Lama, he said, taking example of the Vatican, there are some possibilities including the traditional system of electing someone during his lifetime but did not give details.