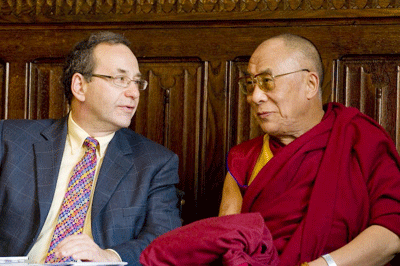 Harry Cohen, MP, chairing His Holiness' meeting with members of the All Party Parliamentary Group for Tibet. (Photo by Ian Cumming/Office of Tibet, London)

London: Whether addressing members of parliament, the press or meeting the Opposition Conservative Leader, Mr. David Cameron, His Holiness the Dalai Lama praised the response of the Chinese authorities to the recent tragic earthquake in Sichuan. He said the transparency shown in dealing with it was commendable and said that if similar response were shown to the Tibet issue that has been lingering for the last 50 years, then it would be beneficial even for China and the Chinese people.
Answering questions from parliament members and the press during separate meetings in the Westminster hall, the Tibetan leader said that Britain, because of its past historical relations with Tibet, has a moral obligation not to forget Tibet while building stronger relations with China.
“The economy is important, but human values are more important. While you are making close relationships in the business field, there is no point in forgetting about principles. I think that is very important”, the Tibetan temporal and spiritual leader said.
His Holiness the Dalai Lama also reiterated his three commitments, namely to promote basic human values, such as 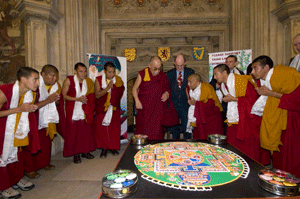 His Holiness viewing the Sand Mandala created by Tashi Lhunpo monks in the Westminster Parliament foyer. (Photo by Ian Cumming/Office of Tibet, London)

warm heart; to promote inter-religious harmony and to work for Tibet, because he is a Tibetan and happened to be the Dalai Lama on whom the Tibetan people put in a lot of trust. His Holiness said the first two commitments he will pursue for the rest of his life, whilst the last commitment would have been fulfilled after he is able to return to Tibet with a certain degree of freedom.
The Tibetan Nobel Peace Laureate also emphasised that his current 11-day visit to UK was finalised since last year and was at the invitations that he had received to give public talks and teachings in London, Nottingham and Oxford. He said in whichever country he visits, his main focus is to promote human values, which is above political considerations and is required for whole of humanity. When asked about Prime Minister Gordon Brown’s decision to meet him in the Lambeth Palace, residence of the Archbishop of Canterbury, instead of at No. 10 Downing Street, the Prime Minister’s official residence-cum-office, His Holiness said the media is politicising his visit.
“Basically, my visit is non-political. The media have politicised it”, His Holiness said, adding that he would be expressing his appreciation for Mr. Brown’s show of concern about the situation in Tibet and then accordingly respond to the questions that are raised by the Prime Minister.
His Holiness is due to meet the Prime Minister on 23 May, Friday, after his meeting with the Archbishop of Canterbury, Dr. Rowan Willliams. His meeting the Prime Minister will be followed by a meeting at the Lambeth Palace with representatives of various religious and faith leaders that was finalised and agreed several months back between the Office of the Archbishop and the Office of Tibet, the London-based official agency of His Holiness the Dalai Lama.
His Holiness besides stopping to see the Sand Mandala made by the Tashi Lhunpo monks in the Westminster Parliament foyer today also addressed members of the All Party Parliamentary Group for Tibet; received the Institute of Jainology’s first Ahimsa (Nonviolence) award; gave an interview to the BBC radio and TV; and audiences to the British actress and staunch Tibet supporter Joanna Lumley and Mr. Robert Fox, who was employed by the Tibetan government as a radio operator before he was arrested and suffered imprisonment for a few years following China’s invasion and occupation of Tibet in 1949/50.
Tomorrow His Holiness is scheduled to meet with the Leader of the Liberal Democrat Party, Mr. Nick Cleggs; take part in a hearing on Tibet at the invitation of the Foreign Affairs Commiteee; give a public talk on “Universal Responsibility in the Modern World” at the prestigious Royal Albert Hall. This follows a meeting with the future heir to the British throne, Prince Charles, at the Clarence House, where His Holiness has also been requested to plant a tree in the garden.
–Report filed by Office of Tibet, London