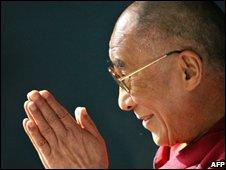 The Dalai Lama has championed a "middle path" policy with China

This weekend the Tibetan spiritual leader, the Dalai Lama, told his followers he had lost hope of reaching agreement with China about the future of his homeland. The BBC’s Asia analyst Jill McGivering assesses what this means.
For decades, the Dalai Lama’s approach to China has been cheerfully patient and optimistic.
So the announcement he is giving up attempts to persuade China to grant greater autonomy to Tibet will come as a shock to many.
He has expressed frustration before – and threatened to go into political retirement. But the key question now is what implications this announcement will have.
Will it lead, for example, to a hardening of position by the Tibetan government-in-exile, if the Dalai Lama’s middle ground of modest autonomy within China is abandoned?
And does it also mean that the Dalai Lama wants to extract himself personally from the political fray? That too is unclear.
Mounting anger
The full answers may not emerge until after a special meeting of Tibetan exiles, now scheduled for November.
It is clear that frustration in the Tibet camp has rarely been greater.
In the aftermath of the riots in Tibet and surrounding areas earlier in 2008, China promised fresh talks. 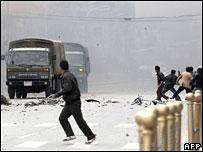 Riots broke out in several Tibetan areas in March

Some Tibetans said at the time that they feared this was an empty gesture, merely designed to ease international pressure on Beijing in the run up to the Olympics.
The apparent deadlock in the talks seems to have confirmed those fears.
There is also confusion about what new strategy might emerge from the Tibetan camp.
Despite China’s allegations, the Dalai Lama has always stopped short of a demand for full independence.
But pressure for independence has grown amongst a feistier young generation which feels years of attempts at compromise have achieved nothing.
It is unlikely the Dalai Lama would support a pro-independence policy, but there may be some hardening of the Tibetan position.
Bowing out?
As a political ploy, the Dalai Lama’s move does help to push Tibet back into the spotlight.
Post-Olympics, many Tibetans feel forgotten. And there is also the wider question of whether the Dalai Lama may indeed decide this is the time to extract himself from the political process in which he’s been engaged for so long.
That would have striking implications. His international profile is one of Tibet’s strongest cards and the government-in-exile would surely be weakened without his advocacy.
But his absence would also raise the stakes for China. Many see the Dalai Lama as Beijing’s best hope – and urge the Chinese to do business with him while they can.
They may find what comes next – in terms of policy and personality – much less accept